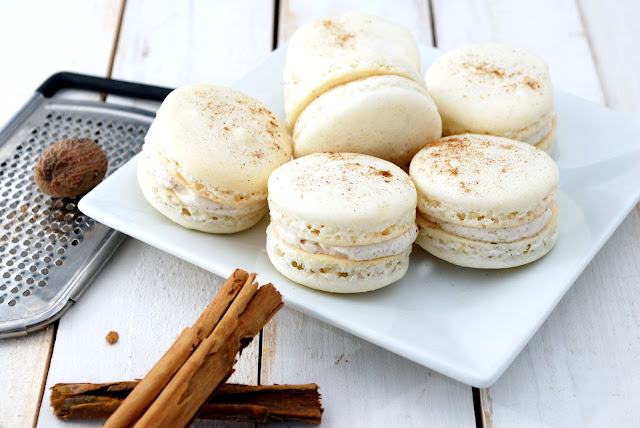 Eggnog MacaronsIngredients:
For the macarons:110 grams almonds, blanched90 grams egg whites (aged 3-5 days in the fridge)25 grams granulated sugar200 grams powdered sugar
Start by putting the almonds in a food processor and pulse until finely chopped. Add in the powdered sugar and give it a few pulses to combine. Set aside.
Line 2 baking sheets with parchment paper and set aside.
In the mixing bowl of a stand mixer (or you can use an electric mixer), beat egg whites to a foam. It should resemble bubble bath at this point. With the mixer still running, slowly add the granulated sugar and continue beating just until smooth and stiff peaks have formed. Check it often so you don’t over mix. You want to stop right at the beginning of the stiff peak stage.
Add the almond mixture to egg whites and carefully incorporate with a spatula. You want the mixture to be thick enough to pipe, but thin enough that it won’t form peaks when piped. I suggest testing the batter by spooning out a small amount on a plate and checking that the batter “melts” into itself. If it doesn’t, give it a few more strokes and try it again.
Place macaron batter into a piping bag fit with a large, round tip and pipe small circles (about 1 inch to 1 ½ inches in diameter) onto your prepared baking sheets. Let macarons rest for at least 45 minutes to an hour, or until a hard shell has developed on the top. You can test this by carefully brushing your finger over a macaron. If it feels dry, you’re ready to go. If not, give it another 15 minutes. Meanwhile, preheat your oven to 300F. Bake for 9-11 minutes, one baking sheet at a time. Let cool completely before filling.
For the filling:2 egg whites1/2 cup sugar12 Tbs butter, at room temperature3/4 tsp ground cinnamon1/4 tsp nutmeg
For garnish:grated nutmeg
Whisk together egg whites, sugar and salt in the bowl of a stand mixer. Set bowl over a small pot of simmering water and whisk constantly until the sugar dissolves. You know it’s ready with the you cannot feel the sugar when you rub a small amount of mixture between your fingers.
Transfer the bowl to the stand mixer and use the whisk attachment to beat the egg whites into stiff peaks, about 10 minutes. The bowl should be cool to the touch before you move on.
Switch over to the paddle attachment and set the mixer to medium speed. Add the butter one Tbs at a time, letting it incorporate before adding another piece. Turn the mixer up to medium-high speed and beat until the buttercream comes together. This will take a while, so don’t worry if it looks soupy or curdled at any point. I find that it helps (if it’s not cooperating) to briefly chill in the fridge for a few minutes and then remixing. Once the buttercream is smooth and together, add in cinnamon and nutmeg and mix on low speed until combined. Place buttercream into a piping bag and pipe a small circle onto one macaron shell. Top it with a similar sized shell and squeeze together carefully. Top macarons with a few grates of fresh nutmeg.
Recipe from Tartellete http://www.cakeandallie.com