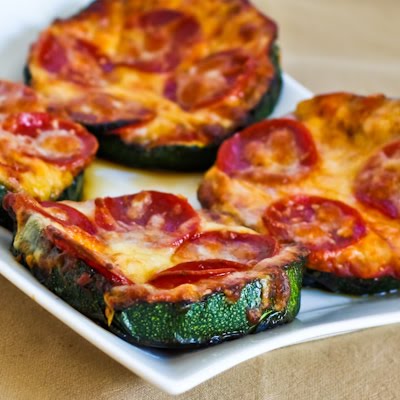 I used an over-sized 8-Ball zucchini to make my pizza, but any large zucchini could be used here. You may want to slice it lengthwise if it’s a long zucchini. (I wouldn’t use the enormous zucchinis that are mostly seeds inside.) In an earlier post I shared the types of sauce, pepperoni, and cheese I use to make South Beach Diet Friendly Flatbread Pizza. I do like the Muir Glen Organic Pizza Sauce I used in that recipe, but this time I didn’t want to drive to Whole Foods, so I was pleased to discover that this sauce from my neighborhood grocer also only had 3 grams of sugar per 1/4 cup. 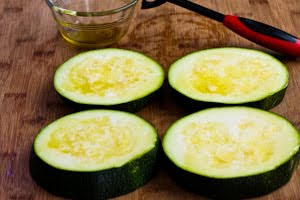 Cut slices of zucchini about 3/4 inch thick, then brush both sides lightly with olive oil. 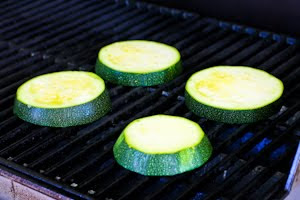 Grill the zucchini slices on one side for about 7-8 minutes, or until there are some grill marks and the zucchini is starting to get tender. (If the slice has one side that’s larger, grill that side first so it’s the top of the pizza.) If you don’t have a grill, this could definitely be cooked under the broiler. 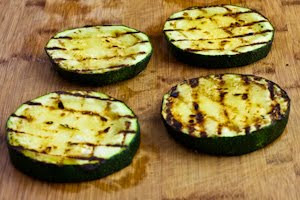 Remove the zucchini slices from the grill and put on a cutting board with grilled side up so you can carry them into the kitchen to add the toppings. 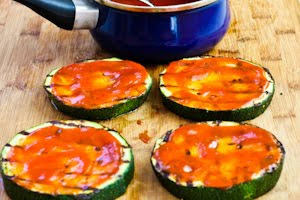 I put about 1 T pizza sauce on the top of each zucchini slice, but the amount will depend on how big your slices of zucchini are. You can heat the sauce if you’d like, but next time I might not bother. (I think Basil Pesto or some type of white sauce would also taste great on this.) 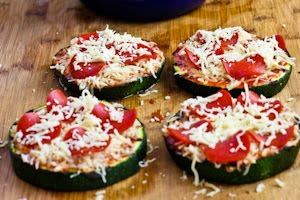 Then put other toppings as desired on top of the sauce. I added a pinch of pizza cheese, a few slices of turkey pepperoni, and then a slight sprinkle of additional cheese. (I used to laugh when Emeril said on TV “We’re really cooking here,” but you can see there was no food stylist for this shot. Sorry about the messy photo, but you get the idea.) 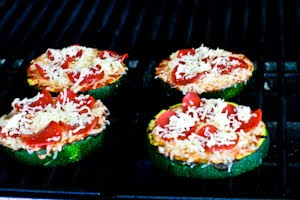 Then put the topped pizzas back on the grill (or under the broiler) and cook for 7-8 minutes more (or probably less time for broiling.) 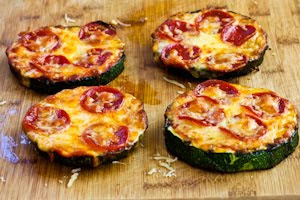 Remove pizza from the grill and serve hot! This pizza will be a hit with zucchini-loving adults who like pizza. I’m not sure if kids who were real picky about veggies would eat this, but I’m guessing quite a few kids would like it. 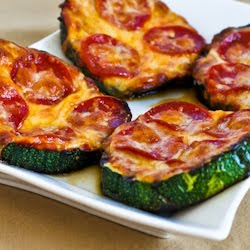 Grilled Zucchini Pizza Slices
(This “recipe” is just a guideline, adjust amounts to make as many pizzas as you’d like. I thought about using grilled zucchini as a base for pizza for a while, but Alea’s Eggplant Pizza Bites at $5 Dinners were what motivated me to try it.)

–large zucchini slices, cut 3/4 inch thick (see recipe notes)
–olive oil, for lightly brushing both sides of pizza and oiling grill grate
–pizza sauce of your choice (I used canned red sauce, but you could also use Basil Pesto or white sauce. Extra sauce can be frozen for later. Choose sauce with the lowest grams of sugar for the South Beach Diet.)
–grated cheese (I used a blend of low-fat cheese called “pizza cheese,” but you can use any cheese you’d enjoy on pizza.

–pizza toppings of your choice (I used low-fat turkey pepperoni, but you can also use sauteed mushrooms, Canadian bacon, cooked sausage, caramelized onions, sliced olives, anchovies, sauteed bell peppers, or any other toppings you’d like on pizza.)
Oil the grill grates (I use a bit of oil on a paper towel), then preheat grill to medium-high. (If using a broiler, it should be reheated as well.)
Cut zucchini into thick slices about 3/4 inch thick. (I used 8-Ball zucchini, which made lovely round slices, but you can cut the zucchini into round slices or lengthwise slices, depending on what shape the zucchini is. I wouldn’t use enormous zucchini with large seeds for this recipe.)Grill the zucchini 7-8 minutes, or until there are some grill marks and it’s starting to be tender. (If the zucchini has a side that’s slightly larger, grill that first so it will be the “top.”) If desired, you can heat the sauce while the zucchini grills. (I did, but next time I might not bother.)Remove zucchini from the grill, putting them grilled-side up on a cutting board you can use to take them to the kitchen. Add sauce, cheese, and other toppings as desired. (I spread each slice of zucchini with about 1 T red pizza sauce, then sprinkled each piece with a generous pinch of pizza cheese, added 4-5 slices of turkey pepperoni, and sprinkled over a tiny bit more cheese.)Put loaded zucchini slices back on the grill and cook 7-8 minutes more with the grill lid closed. (Check them every few minutes to see when the cheese is melted and the toppings are lightly browned, especially if you’re using a broiler. If you have a gas grill where you can regulate the heat, I turned it to high when I put the pizza back on.)

Remove zucchini pizzas from grill and serve hot. (I doubt this would reheat that well, but if anyone has leftovers and tries reheating it I’d love to hear how it works.)