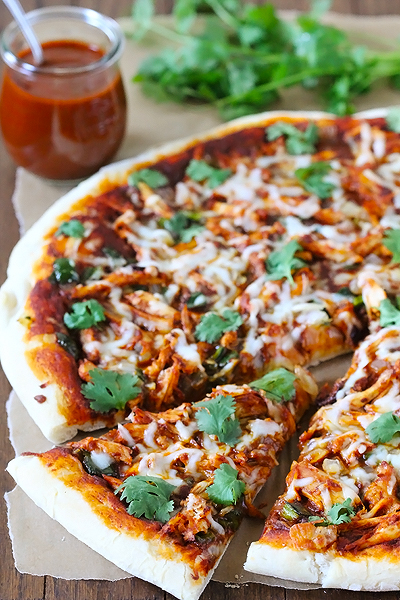 Heat oil in a skillet over medium-high heat until shimmering.  Add onions and poblano, and saute for 5 minutes or until onions are cooked and translucent.  Add diced green chiles and cook for 2 minutes more.  Remove from heat.

In a bowl, toss the shredded chicken with a few spoonfuls of the enchilada sauce.

Prepare the pizza by spreading about 1 cup of enchilada sauce evenly on the crust, leaving a 1-inch border.  Layer the onion/poblano/chile mixture evenly on top of the sauce, then add the sauced chicken, then sprinkle the top with cheese.  Bake for 10-12 minutes, or according to the crust’s package instructions, or until the cheese is melted and the crust begins to turn golden brown.  Remove and sprinkle with fresh cilantro.  Slice and serve immediately.