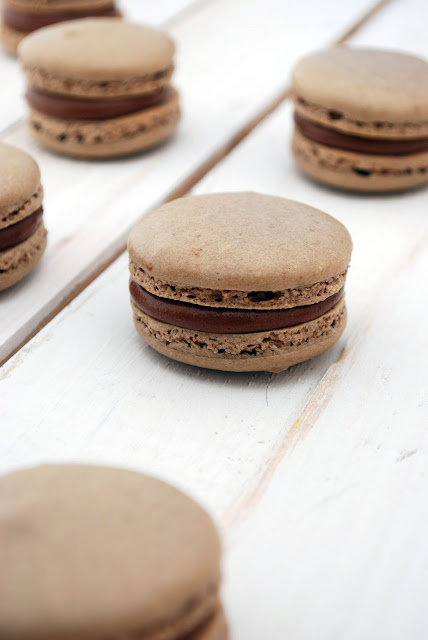 Chocolate Macarons with Whipped Nutella GanacheIngredients:
For the macarons:110 gm blanched slivered almonds200 gm minus 2 Tbs powdered sugar2 Tbs cocoa powder (dark or regular)100 gm egg whites (took me about 3 ½ large eggs), aged in the fridge for 3-5 days50 gm granulated sugar
Start by putting the almonds in a food processor and pulse until finely chopped. Add in the powdered sugar and cocoa powder and give it a few pulses to combine. Set aside.
Line 2 baking sheets with parchment paper and set aside.
In the mixing bowl of a stand mixer (or you can use an electric mixer), beat egg whites to a foam. It should resemble bubble bath at this point. With the mixer still running, slowly add the granulated sugar and continue beating just until smooth and stiff peaks have formed. Check it often so you don’t over mix. You want to stop right at the beginning of the stiff peak stage.
Add the almond mixture to egg whites and carefully incorporate with a spatula. You want the mixture to be thick enough to pipe, but thin enough that it won’t form peaks when piped. I suggest testing the batter by spooning out a small amount on a plate and checking that the batter “melts” into itself. If it doesn’t, give it a few more strokes and try it again.
Place macaron batter into a piping bag fit with a large, round tip and pipe small circles (about 1 inch to 1 ½ inches in diameter) onto your prepared baking sheets. Let macarons rest for at least 45 minutes to an hour, or until a hard shell has developed on the top. You can test this by carefully brushing your finger over a macaron. If it feels dry, you’re ready to go. If not, give it another 15 minutes. Meanwhile, preheat your oven to 300F.
Bake for 9-11 minutes, one baking sheet at a time. Let cool completely before filling.
For the Nutella ganache:½ cup of heavy cream2 oz bittersweet chocolate3 Tbs Nutella
Place chocolate and Nutella in a medium sized heat-proof bowl. In a small saucepan, bring heavy cream to a simmer. Pour hot cream over the chocolate and Nutella and let sit for 20 seconds. Stir to combine until smooth. Place ganache in the refrigerator until thickened, but still pourable. Make sure to stir a few times during the process so the ganache is a uniform consistency throughout. Using an electric mixer, whip ganache until it is a pipeable consistency and light in color. Place ganache into a piping bag and pipe a small circle onto one macaron shell. Top it with a similar sized shell and squeeze together carefully.
Keep macarons in the refrigerator. Let sit for 30 minutes at room temperature before serving.
Recipe adapted from Annies Eats